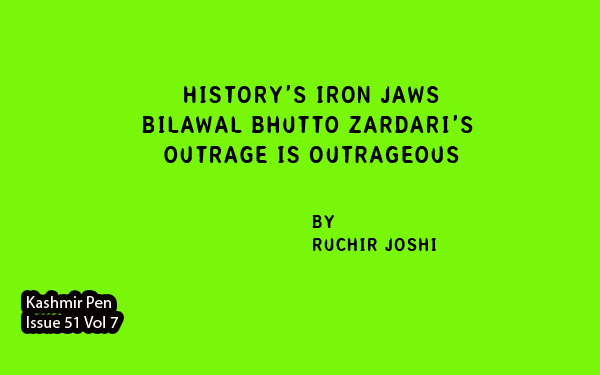 From time to time, history whirls around and bites. And when it does, it can gouge you quite badly, sometimes even to the point of dismemberment. A privilege-marinaded khandani politician like Bilawal Bhutto Zardari would do well to remember that when the monster of past crimes suddenly snaps open its jaws, sharp suits, thinly-draped suavity and cheap theatrical oratory will provide as little protection to a contemporary politician as they did to his maternal grandfather. Responding to India’s foreign minister, S. Jaishankar, calling Pakistan an epicentre of terrorism at the United Nations Security Council and pointing out that the country had sheltered Osama bin Laden, Bilawal B-Z put on his best Oxford debating sneer and had a go at the old enemy for the benefit of the cameras.
Like his counterpart, Jaishankar, Bilawal was at the UN. Back in Pakistan, a couple of days earlier, the minister of state for foreign affairs, Hina Rabbani Khar, had made the claim that “no country had used terrorism better than India.” While this nugget was diaphragm-ripping in its risibility, Rabbani Khar had, without any trace of irony or any self-awareness, also stated that “when you try and harm your region, you actually end up harming yourselves.” In the same passage, the MoS also bizarrely complained that “they [India] have completely mastered the art of using international organisations for their political gain”, which is akin to saying ‘the dratted Indian fast bowlers have mastered the art of bowling late outswingers in overcast conditions.’
Unlike the foppish Bhutto-Zardari who can’t seem to decide between using an ersatz American accent and a fake Oxbridge one, Rabbani Khar deploys what one would call a ‘neutral North Indian upper-class’ accent, which gives the nonsense she spouts a veneer of genuinely innocent ignorance. Listening to her plaintive comments, one feels like rushing to re-assure her: ‘don’t worry, Minister sahiba!’; one feels like saying, ‘Whatever gains adroit Indian diplomacy may have secured over the decades, our current dispensation is working sleeplessly to undo them! Soon they will reduce the Indian Foreign Service to Pakistan’s level of abysmal incompetence and self-damage!’
Whether it’s the shameful fence-sitting on Ukraine, the pusillanimous foot-shuffling over China’s ongoing smash-and-grab of our territory or the cringe-making, easily disprovable lies about robustly flowering free speech and democracy in India, we have never, over 75 years of Independence, presented a more disastrous diplomatic face to the world. There is good reason why many agree that the acronym, MEA, now stands for the Ministry of Embarrassing Arguments, and there is widespread recognition that Shri Jaishankar is the Most Excellent Embarrassment of them all.
So what happens when these Indian and Pakistani worthies come up against one another on an international forum? Well, things get tricky; it’s useful to remember the old axiom that just because someone is a liar doesn’t mean everything he/she says is a lie. For instance, had Joseph Goebbels or Joachim Von Ribbentrop, Hitler’s foreign minister, proclaimed in 1936 that Britain was the biggest and most exploitative colonial power in the world, or that the Belgians had long perpetrated untold cruelty on the natives of Congo, would they have been guilty of fibbing? No. Likewise, when our Minister of Embarrassing Arguments repeats what every Indian foreign minister since the 1980s has been saying, that Pakistan is an epicentre of terrorism and that the country nurtures and exports Islamist terrorists around the region, he is merely reminding the world of a well-known, undeniable fact.
Similarly, if we go beyond the posing and the criss-crossing legs of Bhutto Zardari’s accent at his UN press conference, we are obliged to examine what he is actually saying. Speaking of Narendra Modi, he said — Modi “was banned from entering this country [the US] until he became Prime Minister.” (True.) “This is the Prime Minister of the RSS and the Foreign Minister of the RSS!” (Technically only half true, Jaishankar has no known links to the RSS.) “What is the RSS? The RSS draws its inspiration from Hitler’s SS.” (True, and from Mussolini’s Black Shirts, themselves a model for the SS.) Bhutto Zardari mentions that the other day Jaishankar and the UN secretary-general inaugurated a statue of Gandhi but that if Jaishankar were to be honest he would admit that “the RSS does not believe in Gandhi.” (True.) “… They hero-worship the terrorist that assassinated Gandhi” (Technically slightly complicated because it’s not clear whether he means Savarkar or Godse, but not too far from the truth.) “Within India, who perpetuates terrorism? Is it Pakistan?” (Rhetorical question, but the answer is ‘Several different parties, yes, very much including Pakistan.’)
Part of the historical cost of the mass killings of Muslims in Gujarat under Narendra Modi’s watch in 2002 is that this odious man, Bhutto Zardari, can almost start giggling in glee as he makes the points about Modi being banned by the Americans, about the Rashtriya Swayamsevak Sangh’s fascist core, about the condition of Muslims in India. This grandson of the assistant butcher and cheerleader of the Butchers of East Bengal, Yahya Khan and Abdullah Niazi, can shove the mass murder and rape of hundreds of thousands of Bengalis under the carpet, he can wave off Pakistan’s more recent murderous complicity with al Qaida and the Taliban with a brief “Osama Bin Laden is dead, but …”, he can gloss over Pakistan’s role in executing 26/11 and its hammering away at one of the most shameful moments of India’s recent history.
The facts of different mass killings, whether carried out by the Pakistani army, Islamist organisations or Hindutva groups, are not in doubt. What is clear is that neither country is democratic enough, or truthful enough at an Establishment level, to examine its own genocidal and quasi-genocidal moments. In the meantime, the diplomats of both nations grandstand on the international stage, pantomiming outrage for domestic consumption. Even as India and Pakistan spiral into overlapping and specific disasters, the Establishment in neither country seems to be aware of either the irony or the iron jaws of history.

Ruchir Joshi is an Indian writer, a filmmaker and a columnist

A.S. Dulat on the Kashmir issue and how it has been handled by successive Indian Governments