Rajab Hamid ,No More but “Afsoos Duniya” Lives on… 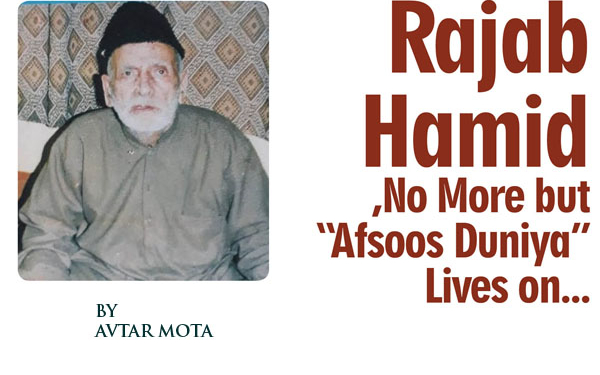 In May 1910, Rajab Hamid was born in a lower-middle-class family residing in Dangar Mohalla, Sotura , a remote village in Tral, Kashmir. The village is located in Tral tehsil of Pulwama district in Jammu & Kashmir. It is situated 15 km away from sub-district headquarters Tral and 40 km away from district headquarter Pulwama. Gaffar Hajaam, his father was a barber. Rajab also adopted his father’s profession. Without any formal education, Rajab Hamid started writing poetry at a very young age. He wrote a song that crossed all barriers of time and space. Apart from being echoed in every corner of the Kashmir valley, this song touched Kashmiris living in England, America, Saudi Arabia, Middle east and the plains of the country. You had the cassettes previously and now you have the CDs of this song selling in the market. Late Ghulam Hassan Sofi popularized his song, “Afsoos Duniya’ through his magical voice. Every time he sang the song, he made his listeners pensive. I am a witness to this fact. I am informed that he had wept like a child while recording it for the first time.

( Alas ! this world never accompanied anyone,
Behold ! how all the great men finally landed at the graveyard.)

Rajab Hamid was initiated into the world of ‘Sufi Mysticism’ by Abdul Gaffar Tantray, a Sufi saint of Midoora, Tral. He had another Murshid and guide: Ghulam Rasool Fida, popularly known as Lassa Khan Islamabaadi. He lived with his daughter Hajra who breathed her last in 1984. After her death, he was a lonely man who devoted his time and energy to poetry or attending Sufiana music Mehfils .He was often seen in the company of Faqeers and saints. Alas ! this great poet faced absolute indifference from society during his life. He died in a state of abandonment and abject poverty. His family continues to reel under this poverty. No institution in Kashmir, though we have many who speak about culture and art, came forward to help him when he was alive, or his family, after his death. Rajab Hamid had a lot of unpublished work. I am informed that lately, the Academy of Art, Culture and Languages ( in collaboration with his followers) has compiled and published a book of his poems.
Rajab Hamid loved his hubble bubble ( Hookah ) and lived a simple life of a Dervish. He left this world on 2nd April, 2008. Peace be to his soul.

Autar Mota is a noted writer and columnist