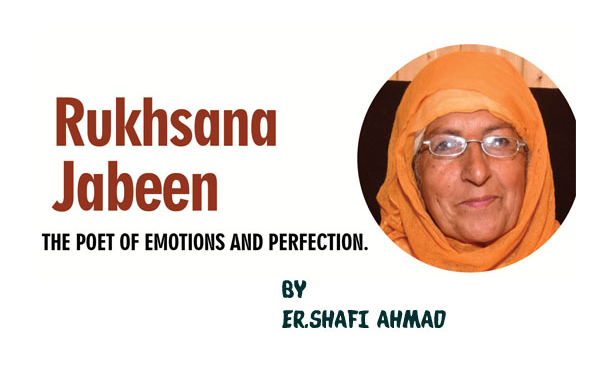 The poet of emotions and perfection.

So far as the nature of poetry is concerned, Wordsworth is of the opinion that “poetry is the spontaneous overflow of powerful feelings.”
And poetry in general ,is considered the literature that evokes a concentrated imaginative awareness of experience or a specific emotional response through language chosen and arranged for its meaning, sound, and rhythm. As such poetry is the expression of the what a poet has been experiencing through ones emotions ,experiences and even the sufferings and when ones pen moves on the paper the words actually are the manifestations of the infatuations. How much the poetry conveys in the form of passion depends upon the poet to be able to translate sentiment into words and adore it with rhyme and rhythm . The women folk , in general, are considered emotionally sensitive and their expression naturally is loaded with endearment.

‘Hamaray wastay bhi kuch na kuch to likhna hai, Furat likh na saka dasht -e – karbala hi likh’ The stanza was carried by the acclaimed writer and critic Gopi Chand Narang in his book which actually made the young poetess prance giving her the confidence of being an upcoming poet leading her way to perfection. She had to lie to her parents regarding the posting of women cadre in their home state although recently one woman had been transferred to Srinagar from some city in mainland India. She was born and grew up in a conservative society where a girl’s education and nature of job had to be such that male female intermix at work places was a taboo. Her father objected to her adoption of radio job but she went on to head the institution. Her relatives pooh poohed the ‘singing and drama job’ but same people later requested to adjust their children in the same setup if she could help. She resisted the patriarchy silently and carved out her own path to success but desisted from an open rebellion and saved herself being dubbed a feminist. Even during student days she got her programmes recorded for radio but kept it a secret from her parents and even extended family. She is Rukhsana Jabeen a down town girl who rose steps reaching the top through grit, hard work, endurance and fortitude.

Rukhsana was born in Khoja Bazar an old town locality of Srinagar ,the capital city of Jammu and Kashmir. Like her other colleagues she received primary education in Primary school Khwaja Bazar, matriculation from High School Khanyar ,moved to Nawakadal women’s college for graduation and ,subsequently, her educational sojourn ended in Kashmir University. In the university she acquired MA previous in Urdu and MA previous and final in Persian with the topic Sher Muasar Iran ( contemporary poetry in Iran ). To her good luck she got a very competent and affectionate guide namely Asif Nayeem Sidique. In the process in 1982 she received the appointment orders for the government teacher’s job which, of course, was not to her liking. But then Almighty has always plan B ready for such people. The celebrated author Paulo Coelho has a good quote on this issue ,”When you want something, the whole universe conspires to make it happen.” And same happened with Rukhsana who knew nothing about the process of selection in the higher offices. But then an officer in the radio guided her to getting and then filling up the form with the UPSC. The hard working girl was, subsequently, appointed as programme officer. Those in the family knew nothing about the officer’s posts in radio and had limited knowledge regarding drama and singing only. They had to be educated and satisfied about the posts of officers lying in the radio.

“ In the first instance I was given the charge of Yuva Vani wherein I spent five years and the important thing about it being I travelled length and breadth of the state for recording the programmes and talent hunt exercise. Despite being a woman, I achieved more than what men had acquired during their exercise.” Says Rukhsana about her initial posting and responsibilities.

Acclaimed poet and writer Bashir Dada says while recalling Radio days, “ He(Bashir Shah) would set the Nok Palak of our writings right the art which over the years has faded. He would advise to study which elements are good in your performance or writing not only the weak ones. Rukhsana Jabeen is another talented person who could match such a quality Bashir Shah possessed and put to genuine use.
Rukhsana Jabeen rose to the position of very talented poets and down the memory lane she remembers her university student days . “Bazm e Adab “ was an agile and thought provoking experience in our student life. Our teachers and guides impressed upon us to try out ,though amateur , attempt at poetry and prose writing. “My teacher Prof. Hamidi Kashmiri once asked me to write ,if not anything at least who am I? I thought over and wrote ‘Kabhi Shola Kabhi Shabnam…….’he felt satisfied and this became a catalyst for my writings. Subsequently , Bazyaft the university magazine published my first Ghazal ,a commentary on Zaheen Zaidi’s Dharti Ka Lamas also got some space . Cultural academy’s Shiraza published Hamidi number and I got the space.”

“My poetry progressed till it reached state, national and even international level. In one such Mushaira, that I participated, a person of the stature of Ahmad Faraz recited. Interestingly , Rehman Rahi, the legend from Kashmir, once going through my poetry said if it’s hers then I admire her. This was the biggest tribute to my poetry and it was a sort of certification by none other than Gyan Peth Rehman Rahi . “
“Role of Mushairas is very important in the promotion of language and the genre. However, nowadays a new trend has caught up. In order to popularize glamour is added in the form of a beautiful lady who actually may not be the poetess .This is done to add attractions.” She further adds. “ Despite the glamour drawback Mushaira have their own significance. For me radio and Mushaira have done yeoman service as about the great people I had read in books only I could see them face to face and even interview them .”

Rukhsana Jabeen is equally adept at prose writing like poetry .During her radio job days she wrote features and radio documentaries about some of the doyens of Urdu literature. Apart from Qurat ul Ain, Krishan Chander, Hamidi Kashmiri she wrote about Mulla Tahir Gani Kashmiri. These essays were a class in itself . She believes more people are inclined to poetry than prose or fiction as poetry is easier in many aspects. Fiction has to be explained in longer canvas and has got to a theme to stick to while as poetry does not need a particular theme.
In Kashmir Rukhsana is not impressed by any writer or poet however outside Kashmir she believes Zahida Zaidi and Kishwar Naheed are the feminine names to reckon with. This is despite the fact generally people place Parveen Shakir on a high pedestal.
She believes she has not been a feminist and has not written poetry on themes because poetry is not written and whatever is written with a particular mindset is in no way poetry. It can at the most be propaganda .”In poetry one’s experiments and Jazbat find place but not a particular theme. “ she explains the scenario in detail. “ I have at times written poetry with a class of women in mind who were harassed ,at times even by females also, but I have not included that in my collections.” She elaborates . The following stanza is about a female who despite being less educated feels that she has very high status.

Kuch bhi nahin hai acha meray siwa Jahan main
Maindak hoon main kuwain ki kyon dekhoon aasman main
Rukhsana Jabeen took up the task of translating poetry of some of the legendry Parsian poets.” Since I am poet of Ghazal, though Nazm also supported me to express myself ,I therefore chose Hafiz for translation. I discussed the idea with the ace Urdu/Parsian scholar Syed Raza. We decided to take up fifty ghazals by each but unfortunately he died midway and only twenty five ghazals in translation could be completed.” She details. And to a question why she did not choose the indigenous Mulla Tahir Gani she responds humbly ‘he is very difficult to translate.’ One such ghazal translated into Kashmiri is hereunder;

Prof. Majrooh Rashid is of the opinion about the talented and celebrated poetess that her poetry ,when compared to other females, is technically fit and rich as Prosodi is concerned. He believes Rukhsana’s poetry has universal canvas while as others write within local contours. To a question about such dimensions Rukhsana replies, “ I try to be a perfectionist, write with seriousness , read rather wade through the poetry of great names. I try to understand the soul and delve deeper which possibly make the things substantially elucidated. “
To the surprise of one and all Rukhsana Jabeen, the acclaimed poet, has not come out with a collection of her poetry. On this issue she tries to save herself by saying ‘may be I am a slow moving creature.’
Post Script : When she got introduced to a lady, a Haj Pilgrim at Makah ,she asked her to write a Manqabat in praise of Ahli Bayat which could pave her way to visit Iran. But despite her efforts for months together she could not complete the task. “However, very close to the event timing , l wrote Manqabate Hazrat Fatima ؓ in Persian on the advice of chairperson of Global Association of Muslim Women Dr Touba Kermani who invited me for participation in 31st International Islamic conference in 2017 December. I wrote Asalat O Wasalam Ai Noor e Ain Mustafa (SAW). Asalam Ai Dukhtar e Khairul Warah Sol e Allah which not only formed the part of international conference but was found adorable by the organizers.” Rukhsana walks down the memory lane.

Er.Shafi Ahmad is a writer and columnist, can be reached at wanishafi999@gmail.com